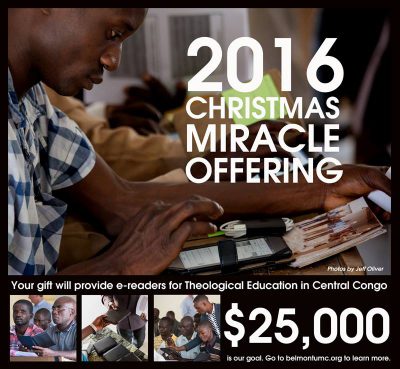 Each Christmas, Belmont United Methodist Church (Nashville) collects a Christmas Miracle Offering that is used for missions and ministries worldwide. In 2016, congregants gave more than $25,000 that will be used to provide e-readers for theological education in central Congo.

Without e-readers, students at Wembo-Nyama Methodist University rely on lectures from single books owned by the lecturers. Students who graduate to serve as local pastors have to leave their Bibles, textbooks, devotionals, and United Methodist Book of Discipline and Book of Worship behind at school. With e-readers, students who have made payments each semester to purchase e-readers, serve as local pastors fully equipped to be spiritual leaders across the Democratic Republic of the Congo.

“As a divinity student,” said Belmont member Keller Hawkins, “I cannot imagine doing my studies without books—they are the primary resource for my learning. I was excited that Belmont chose the e-readers for the 2016 Christmas Miracle Offering.”

Hawkins was first introduced to the project as an intern in 2013. “Since then,” she said, “I have been amazed at the success and growth of the project. Empowering seminarians in the central conferences by providing them sufficient technology for their theological education is United Methodist connectionalism at work—and what a beautiful thing it is! When we give, we are empowering students to answer their calls to ministry and providing them with the theological resources they need for the journey.”

Durable, transportable, and tested by The United Methodist Church in Africa, e-readers are capable of containing 1,500 books and allow students to read material beforehand and have the textbooks they need to study and write their papers. In addition, the e-readers work well without Internet access and hold an electrical charge for two to four weeks.

“It is almost impossible to put ourselves in the place of United Methodist seminary students in central Congo,” said Belmont member John Kennedy. “But try to imagine doing secondary or post-secondary work without a single textbook. Think of using nothing but notes copied from a blackboard or maybe shared copies of a few handouts, articles, or chapters of books. How well would you do? That is the hurdle that seminary students face in the two seminaries in central Congo.”

More textbooks is not the answer. “The expense of production and transport place them out of reach of universities and students,” Kennedy said. “Additionally, they don’t last long in the tropics where climate control is impossible. E-readers, basically Kindles, offer a practical solution.”

Thanks to the generosity of Belmont’s congregants, the 2016 Christmas Miracle Offering will provide about 125 e-readers. “Add to that the more than 1,500 e-readers that have been distributed to 22 theological seminaries in Asia and Africa, and one can see how these devices are changing theological education across the world,” said Kara Lassen Oliver, Director of DRI Publishing Initiatives for Central Conferences.

The future of e-readers is bright. On December 13, 2016, executives from the General Board of Higher Education and Ministry and Discipleship Ministries met to sign a renewal agreement for the E-reader Project, extending the initiative between the two United Methodist agencies through the year 2020.