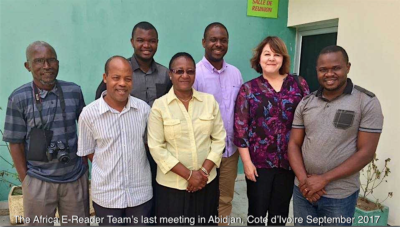 Team members bring a report from an E-Reader Project school they have recently visited, along with evaluations of the project there. This includes strategizing for the project’s next steps and holding a “kindle clinic” to discuss troubleshooting with the e-readers and additional training with the devices.

This is the team’s first meeting in the US. Holding the meeting in Nashville where so many of the United Methodist agencies are located gives some African team members the opportunity to visit these agencies for the first time. It also lets the team work face-to-face with the agencies toward the future of the project

The team was formed in order to ensure that the Project would be led and directed by African leaders rather than by only US leaders. Co-led by staff of the two partnering agencies that oversee the project (Discipleship Ministries and Higher Education and Ministry), the ultimate goal as UM agencies who work in the central conferences is to empower people in those countries to take the leadership in all initiatives themselves. The Africa E-reader Team is about transferring power and leadership where it should reside—in the hands of people who live and work outside of the US. This third gathering as one step closer to achieving that goal.